Loreena McKennitt's The Book of Secrets 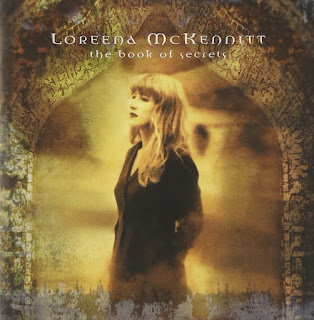 Every artist has a unique creative process that enables them to do what they do. It's something that provides stability and routine--that helps them to find their way back into "the zone" of their respective creative outlet. For some, it's rituals or a particular setting while for others it might be something familiar that helps them to engage.

The single most important component of my writing process is music. It serves myriad purposes ranging from blocking out sounds and providing background noise to evoking a specific mood or memory. I've crafted entire playlists for single characters and have had whole sections influenced by a single song (the "Darkness" chapters, for one).


When I first began writing The Lion in the Desert more than thirteen years ago, I realized immediately that I would need some sort of acoustic assistance. I've always used music to help me to focus when writing academic papers and when drafting personal musings but I saw right away that novel-writing required a different level of attention to my sonic backdrop; fortunately, Fate had my back.

Several years earlier, in 1997, my Mom heard a song on the radio that she really enjoyed. The artist's album had just come out in September and so I decided to buy her the CD for her birthday, which was coming up in a few months. For my Brooklyn folks, I walked over to The WIZ on Flatbush and U and picked up the album: Loreena McKennitt's "The Book of Secrets." I was utterly unaware of the impact that this seemingly innocuous purchase would come to have on me as a writer.

First, the fact that Ms. McKennitt's song "The Mummer's Dance" was even ON the radio speaks to the incredible diversity in programming that stations like 95.5 PLJ and even Z100 displayed back in the '90s. Second, the instant I heard the track, it stirred something inside of me. It, along with the rest of the album, had a transportative effect--whisking me away to some far-off, mystical place.

Now, nearly twenty years later, it still holds that same power for me; the songs on that album are still integral to my creative process and have been included on the playlists for the writing of all four of the Kosmogonia novels. Loreena's voice is soothing and ethereal--her arrangements hauntingly beautiful. If you're looking for something different then I'd highly recommend scoping it out!


When it comes to my creative interests, I enjoy variety as opposed to static consistency. Musically, I enjoy listening to everything from Billy Joel and Benny Goodman to Slipknot and Slayer. Aside from keeping my listening selections fresh and diverse, the broad array of bands I enjoy serve also to influence my guitar/piano playing and music writing in general.

The same situation applies to my writing as well. It is said that in order to be a great writer one must also be a voracious reader. I'm far from the former but undeniably one of the latter. My obvious literary influences include the likes of R.L. Stine, Stephen King, and H.P. Lovecraft but there are far more writers who have helped to shape my fiction writing that couldn't be further from my preferred genres. Irish heavyweights like Yeats and Keats, Oscar Wilde and James Joyce have had arguably more impact on my writing style and the way that I approach literature in general.


With that said, I take a far different approach to constructing my prose. I seek to create melodic passages in my descriptive runs, opting for the word that sounds the best phonetically rather than either the simplest or the most impressive. Stylistically, I try to eschew typical writing conventions at times in favor of an approach that I believe will produce the greatest visual image in my readers' minds. Television shows like LOST, Fringe, Breaking Bad, and The Walking Dead all employed storytelling techniques that, in turn, have appeared in my own writing.

In The Lion in the Desert, for example, I make use of flashbacks, varied time shifts, and occasionally parallel narrative exchanges. Though the story is driven by Tim Channing's experience via third person narration, to pursue an entire novel's worth of that would be boring and unfulfilling. In order to keep the flow fresh and forward-moving, I employed perspective changes at three key points in the novel. Each of these featured a new face to follow and furthered the background plot slowly bringing it to the forefront where it ultimately joins Tim's personal narrative.

The first of these sections is where I drew the title of the novel from; it is also what inspired the book cover. When I saw that particular picture after completing my first draft of the novel, I immediately saw the long corridor traversed by the two mysterious figures. In my mind's eye, I looked beyond them as they approached the security door, moving towards the other end of the seemingly interminable passage, ultimately reaching the steps in the photo.

I felt like the picture was at once unsettling and foreboding but also mysterious and intriguing. It made me, at least, wonder what lie beyond the stairs at the top but also question what they ultimately led down into. Of course, I found my answer immediately but for the potential reader, I hoped it would make them wonder enough to want to find out for themselves.
Posted by The Stay At Home Scholar at 9:27 AM No comments:


I have found that, with nearly all of my creative pursuits, I serve more as a conduit than a creator. I can craft a methodical melody using music theory, I can direct the dialogue of a given written scene, and I can manipulate a photograph in post-edit to transform it in whatever way I desire. The quality of the end-product in each of those instances though seems always to pale in comparison with those that arise from more organic places--ones where I cede control to the moment and allow IT to direct ME. Whether it's a song, a story, or a photograph, by subjugating my creative intentions and subsuming myself to that instant of creative flow, I'm able to bring forth something far greater than I could concoct solely on my own.


With regards to The Lion In The Desert's cover, when I had finished the manuscript (and its subsequent multitude of edits and rewrites!), I once more had an idea of what the end product should be. I assumed that the cover would be of a desert sunset--one that would be an obvious and literal connection to the novel and its title but serve simultaneously as symbolism of an ingrained metaphor as well. I scoured my collection of photographs but failed to find any that conveyed the mental image that I had--one that stemmed from a particular scene in the final quarter of the novel.

Relinquishing that control once more, I perused my portfolio and found a far broader variety of photographs jumping out at me. Most were still sky shots but I noticed that the common link between them was a far ominous vibe portentous of some terrible danger or darkness to come. Recognizing that THIS was the key component to the final cover, I came upon the photo that I ultimately used and knew immediately that it was the one that I was looking for: it was dark, cold, and creepy AND, to my surprise, it too had a direct link to a scene in the manuscript...
Posted by The Stay At Home Scholar at 9:26 AM No comments:

In 2006 my wife Heather and I took a trip to western New York. We visited the Corning Museum of Glass as well as Watkins Glen. I was pretty pumped about the latter because of the Thunder Road attraction--one of the few NASCAR speedways where you can drive your own car ON the track. I had also heard great things about a hike you can do there that follows a natural stone pathway around and behind waterfalls.

After driving on the racetrack but before heading out to Corning, we decided to undertake the hike. With camera in hand, we made our way along the slick-stone ascent, snapping pictures along the way. We paused by a waterfall and took a few shots before continuing along. Something made me stop and turn around after we had descended the steps and what I saw fanned my photographic fire.


What you see in the photo is what ultimately became the cover of The Lion in the Desert. The crazy part is that I took this shot well before I learned any photo editing skills so what you see is exactly what I saw, as it was, at that exact moment. The second photo emphasizes that point because I took a few steps forward and tilted the camera up and, as you can see, it completely altered the scene. 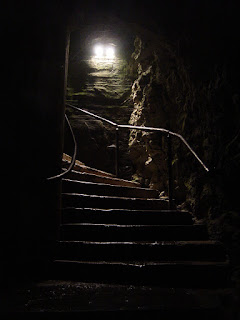 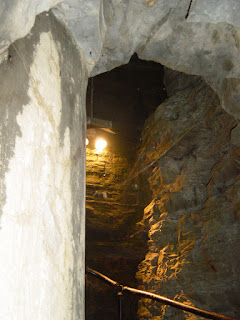 Posted by The Stay At Home Scholar at 9:25 AM No comments: